As you’ve probably gathered, I love vodka and so it seemed fitting I undergo writing a Belvedere Vodka review to kick things off.

Belvedere Vodka is referred to as the world’s first luxury vodka, so I figured it would be the best place to start because who doesn’t like a touch of luxury in their life?
If you’re interested in Belvedere vodka’s history, production methods and overview, you can read my overview article here.

To recap, it’s a four-times distilled vodka produced in Poland from Dankowski rye as well as artesian water derived from their private wells. It’s quite pricey and will range between $45-60 (£34.99 upwards in the UK) depending on where you buy it (online retailers and large markets seem to consistently have the best prices due to buying power). Bear in mind that this is classed as a premium spirit and definitely belongs on the top shelf.

Below I’ve found the best prices online for those who want to buy Belvedere Vodka:

Holding a bottle of Belvedere vodka for this review, I feel empowered. As mentioned in the Belvedere Vodka overview, one can see the historic Belweder palace printed on the inside of the bottle, framed by the frosted glass, creating a gorgeous window to view it, which is magnified and seems to move slightly through refraction of the vodka when you look at it straight on and at an angle. The tall and slim bottle sits nicely on my shelf and is in line with other premium, top-shelf vodkas such as Grey Goose (whom I believe started this tradition / style of long tall bottles). This is most probably a purposeful action, so as to align itself amidst these other revered brands, so it definitely doesn’t feel out of place for me. 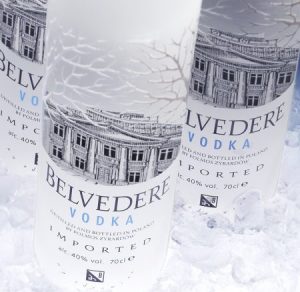 Even if I weren’t to like this vodka and relegate it to the back of the drinks cupboard (in terms of my go-to drink of choice), I’d happily have this piece on display, quite simply because the design is beautiful. Elegant, classy and the palace being visible is a great effect – I’ve even asked bartenders to pull a bottle off the shelf before so I could show my friends just how great this bottle looks. I’ve considered cutting this bottle in half and making a custom drinking glass too, it takes some effort but if I were to ever find myself on a lonely Sunday with little to do, you can bet your bottom dollar this bottle of vodka would soon find itself a new home on my glassware shelf.

So to summarise, the bottle looks great, it’s unique enough to be recognised immediately but not so unique (like some of the more quirky vodka brands out there ie: Uluvka Vodka).

So, it’s time to try the famous Belvedere vodka! As with most of my vodkas reviews, I taste the product in a variety of different situations. As per tradition, I start with the Belvedere being chilled in my freezer. It had sat in there for about 4 hours prior to my initial sampling and it registered at around 1 degree C once I’d poured it into a small, tall crystal glass. Visually, the vodka moved slightly sluggishly in the glass, almost like a thin cream.

The aroma was incredibly soft and clean, hints of lemon being released amidst spicy notes, which I absolutely adored. So far, so very good. Eager to proceed, I slowly took a sip of the vodka and found the lemon spice to be circling around my mouth, which rose in power somewhat within a few seconds. The flavour was firm and authoritative, clean and smooth yet remained soft and gave way to a slight earthiness throughout the spirit. This flavour was neither harsh nor aggressive, it was a gentle subtle taste that left me feeling very satisfied without any gagging or negative reactions, much as one would find with lower quality vodkas. The filtering has definitely led to a great product here.

Moving on from this, I left the spirit for a few hours and put it into the refrigerator to allow it to warm up slightly and slowly. Once a few hours had passed and it now sat at 10 degrees C, I tried it again. Needless to say, the positivity remained and I was taken aback somewhat at how it managed to retain it’s flavour despite being significantly warmed.
Having not changed much in terms of taste (which is a great thing, might I add), I decided to leave the bottle on the counter as I stepped out to hit the gym (going to the gym post-vodka – crazy I know! Makes those spin classes a lot more fun).

Coming home after a few hours, the bottle now sat at room temperature (around 24 degrees C), I was once again amazed at how well this vodka retained it’s flavours and the subtleties within. Comparatively, other than the obvious temperature difference, there wasn’t really any change in flavour, mouth feel, harshness or enjoyment. It still tasted amazing and smooth, unlike other cheaper vodkas where vegetal flavours rise in line with temperature and impressions alter. Belvedere vodka remained a great product, tasting excellent across all three temperature ranges, therefore meaning it’s good to go whenever I am, a very important factor in my vodka consuming moments.

Now for the more fun part of the Belvedere Vodka review, shots! I actually did this alongside when I was taking it from a tall glass (double the fun?) so I could try it with each temperature range I mentioned earlier.

With each shot of Belvedere Vodka I took back, it was apparent that the earth and soft lemony notes remained consistent. However, as you’ll be taking a lot more liquid in one go, harshness is usually bound to follow but alas, this vodka ranked incredibly low on the ‘OH MY WORD, I AM GOING TO BE SICK’ scale – something that is also very important to me! Doing a full 35cl shot did bring about higher levels of spice over my palate as the vodka increased in temperature, but that’s mainly because the cold numbs the tastebuds ever so slightly (which is why lager / beer tastes so much better when it’s cold as opposed to cellar or room temperature).

The great thing about Belvedere Vodka though was that at no time did the levels of spice running rampant across my tastebuds become uncomfortable (unlike the Russian Standard brand or other cheaper variants, which have me rushing for the nearest soft drink to chase it down with). Despite the vodka being at room temperature, there was barely a trace of the negative metallic hints or horrid aftertaste. The general flavour and feeling was one that dictated that Belvedere Vodka is indeed a highly ranked spirit and I would consider it to be one of, if not the best vodka of 2017.

So far so good, Belvedere is living up to it’s reputation as a high-class, top-shelf, premium spirit. I can’t get enough so far!

Oh dear, the ‘worst’ part of my Belvedere Vodka review…combining it with food! Well, that’s a life, I love this part with a passion – it always reminds me of that scene in Ratatouille when he combines different foods together and creates a world of magical results, plus I get to eat in the interest of public service, so I can’t complain whatsoever!

I sat down with my partner on a saturday evening and threw together a plethora of sausages, cheese, bread and biscuits, paired with way too many sauces and dips to list. We both sipped from our glasses and found that Belvedere was incredibly steadfast alongside everything, paired well and portrayed a bold character irrespective of what it was married with. Despite it not seeming to be an overpowering vodka, it refused to be overwhelmed by even the most garlicky of sausages, shining through each mouthful

For my main tasting event with my friends, there was a variety of breads and crackers served; as well as a variety of salty and spicy sausages and cheeses. We also enjoyed a sour cream based spinach dip with the different breads, and freshly cooked salt and pepper chicken wings. The Belvedere Vodka continued to demonstrate its consistent character regardless of whether I paired it with bread and cheese or with the spicy sausage.

Obviously, this isn’t a ‘jack of all trades’ vodka, so it wasn’t exceptional with all pairings. It did however stand out best alongside cheese and bread based items, more so because they aren’t too heavy themselves and the lemon hints compliment the food amazingly. In short, Belvedere vodka works very well with a huge variety of dishes.

During my food session, I took the opportunity to pull together a simple vodka dauquiri, mainly because it highlights the vodka’s ability to shine with it’s own flavours and demonstrates it’s mix-ability with fruit. The flavour was gently tart and showed subtle levels of sweetness which lead to a refreshing and tasty beverage, which sat very well with myself and my partner.

Later on in the week, I tried a few more cocktails using Belvedere vodka as a base – namely Meadowland Breezes, Mules and Martinis plus a few other ‘custom’ works that I’ll be sharing with you very soon. Each drink was given an edge of superiority over my regular cocktails, clearly because the spirt used was a premium vodka and resulted in a much cleaner finish without any degree of harshness whatsoever. So much so that it far outperformed my go-to vodka base of Finlandia (years of being a bartender form die-hard habits). So, this being said, I’d definitely recommend using Belvedere Vodka for any high-brow cocktail that calls for a touch of sophistication or when being prepared for those with ‘fussier’ tastes.

The Final Score for the Belvedere Vodka Review

I hope you’ve enjoyed my Belvedere Vodka review and agree with me in thinking that this vodka is incredible, it’s light and refreshing with a soft and gentle flavour with lemon hints, a gentle spice and barely any aggressive aftershocks. The only diminishing factor lays mainly within the field of cost – if this was slightly cheaper, even by $5-7, it would be a solid 10/10.
A strong all-rounder and even stronger player when taken individually.