Grey Goose vodka is a brand produced in France from French wheat. Created in the summer of 1996 by Sidney Frank (Founder of the Sidney Frank Importing Co) under the premise of creating a luxury vodka brand for the American market. Having set this as a goal, the product soon followed and swiftly became incredibly popular in the American market due to a “confluence of timing and trends”, as stated by the writer Seth Stevenson. As well as this apparently good timing, an effective guerrilla marketing campaign was employed, which when paired with a higher-than-average price when compared with other premium vodkas, lead to the general impression of Grey Goose vodka being an almost super-premium product in the American markets.

Sidney Frank partnered with François Thibault, a renowned French Maître de Chai (Cellar Master) to assist with the transition of skills from cognac production to vodka. France was selected as the company’s base for production on account of it’s rich culinary history as well as an effort to stand out from other vodkas created in Eastern Europe and Russia. 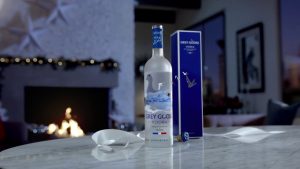 The water used in production for Grey Goose originates from naturally occurring spring water in France, which were filtered though Champagne limestone, which was then combined with locally produced and harvested French wheat. The natural spring is location 150 meters (500 feet) underneath the blending facility in Cognac. Filtering through the limestone allows for calcium-rich water, which aids in the smooth taste we all know and love.

As previously mentioned, Grey Goose vodka comprise of French wheat, which is grown in Picardy, France. The wheat itself is a soft, winter wheat, which is sown in October and harvested towards the end of August, which allows for an extra four months of growth when compared to summer wheat. The wheat itself is deemed to be ‘Superior bread-making wheat’.
It is then distilled in the same region, then the distillate is transported to Cognac, France. There it is blended with natural spring water and bottled.

During fermentation, enzymes are employed to break down the carbohydrates in the wheat to form fermentable sugars, the building blocks of alcohol. The fermentation process then spans over six tanks to create a 20-proof wine / beer. This liquid is then distilled into spirit form through a five-step process.
The natural spring water is added and together with the current state of the liquid, it is filtered through a copper filtration system to impart additional flavours. The water is then filtered in an attempt to lower levels of impurities. Once this process is complete, the vodka is bottled in a facility that caters only for the bottling of Grey Goose. The final touch is then to add a replaceable cork lid, as opposed to the standard screw-top caps seen on most vodkas on todays market.

Grey Goose is known to be the first ever vodka to be produced in the tradition of Maître de Chai. This, in turn, allows for aromas to be integrated into the product during the distillation process, creating flavour variations. As the brand has such strong roots in France, it seemed only naturally for a collaboration to ensue. Grey Goose La Poire was formed through the relationship between Thibault and a pastry chef from Paris. It was this chef’s pear tarte that inspired the recipe for the new flavour and was deemed a great success by consumers in the American market.

Grey Goose vodka does not produce excess levels of heat on one’s palate during consumption, which leads to a smooth experience and allows for the subtleties in the product to be savoured more so than competitor products.

Grey Goose was dubbed the best tasting vodka in the world in 1998, according to the Beverage Testing Institute, which gave the company a strong footing for an acquisition from the Bacardi group in 2004. The brand was sold for a total of $2.2 billion USD and that year, Grey Goose was the best selling premium vodka in the United States, selling more than 1.5 millions cases that year alone. 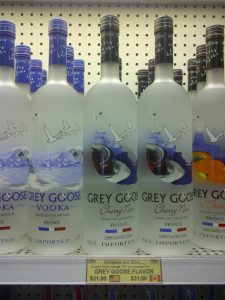 Thiabult has stated several times that the company does not intent to further it’s range of flavoured vodkas so as to maintain the integrity of the original product.