Inspired by the Polish president’s palace of Belweder, a word that itself inspires greatness, Belvedere vodka can be found from it’s homelands of Poland to Hong Kong and USA, London and Paris. In fact, Belvedere has now established itself as an easy drinking, premium vodka and definitely deserves it’s place on the top shelf.

The name, as you may have gathered is derived from the word Belweder and is a major player in the luxury drinks market. Simply taking a look at the bottle, one can see the Polish president’s palace shining through as part of the logo.
So what exactly is it that makes this vodka so special that the palace, a royal residence of international fame is permitted to grace it’s bottle?

This is a traditional drink that resonates with airs of aristocracy, steeped in a vast history, which in turns provokes a sense of royalty with those who possess it. Over time, the brand has established itself with international fame and recognition, therefore allowing it’s place on top shelves across the world.

The distribution literally spans worldwide and with it, it carries it’s renown, allowing most weary travellers a chance to indulge in it’s familiar and unique taste as one revels in the aristocratic airs.

There are several varieties of Belvedere vodka, which maintain the core ingredients and processes whilst allowing a wide audience to experiment with flavours and new ventures of taste.
Aside from the standard, unflavoured version, the most popular is the Pomarancza orange flavour; this consists of lemon, mandarin and oranges. It’s so popular in fact that many regard it on equal footing as the unflavoured version itself.
As well as this, other flavours such as Orange, Citrus, Black Raspberry, Bloody Mary and Pink Grapefruit are available; all with the intention of giving it’s core audience a choice to mix things up and enjoy something slightly different whilst keeping to the original values of Belvedere vodka that make it so great, 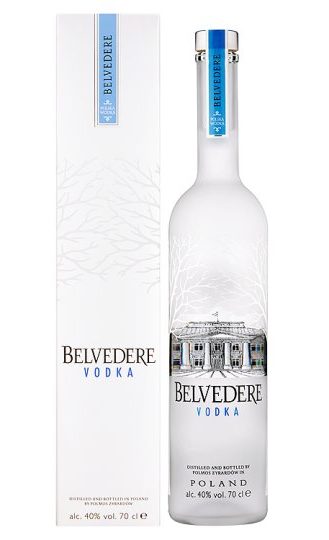 As previously mentioned, the levels of grandeur that exist alongside this brand are high, in fact they’re incredibly high! From the heritage behind the name, to the presidential palace logo emblazoned on the inside of the clear opening of the frosted bottle, shining through, refracting it’s presence to the beholder.

The bottle itself is truly beautiful to behold and even if you’re never had the chance to purchase a bottle, it’s definitely worth asking your local bartender to pass the bottle over so you can witness first hand a truly remarkable design. The brand encapsulates a vision of high society and the upper classes, liquid aristocracy that’s bound to turn heads when you order a bottle or a glass.

Despite it’s appearance of high societal grandeur, Belvedere isn’t too expensive when compared to other brands in it’s range, in fact it’s surprisingly competitive against other top shelf vodkas that pride themselves on high quality products.

Belvedere is distributed and produced by LVMH and is produced exclusively the Polish town of Żyrardów with worldwide distribution.

How much is a bottle of Belvedere Vodka?

At time of writing, a standard 70cl bottle costs $34, which defines it as a top-shelf, premium vodka. These premium items are best suited for sipping and high-end cocktails that require finely crafted ingredients to give a clean and impeccable taste. Interestingly, despite this brand being classed as a premium vodka, it hasn’t had a great deal of success in international spirit tasting competitions when compared to others in it’s class.

How many times has Belvedere Vodka been distilled?

Belvedere is distilled four times as they are distilling rye, which can be both bold and spicy. In an effort to appeal to a wider range of consumers, especially western palates (more likely those who haven’t grown up drinking vodka), they are careful of the rye’s character, which results in four distillations.

Is Belvedere a potato vodka?

No, Belvedere is distilled solely from top quality Dankowskie Gold Rye and undergoes four distillations to create the ideal balance of purity, character and taste.

In conclusion, Belvedere vodka adheres to the firm traditions of over five centuries within Poland and it’s production of high-quality vodka. It was one of the first brands to introduce the premise of high quality, top shelf vodka and is something they still maintain today with great pride and respect.